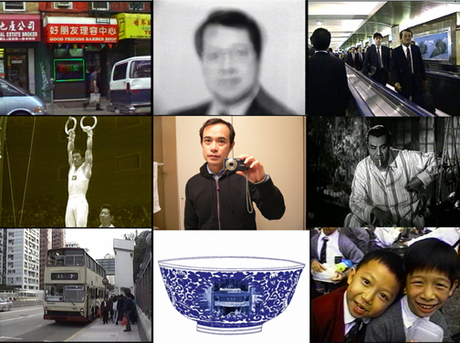 At 2pm, guest speaker Kegan McFadden will respond to Tam’s photo series, Ghost Image, through which the artist collects photographs and documents of his lover Kirby who died of an AIDS-related illness in the mid-90s. McFadden will talk about stories, influences, and how these two fleeting things can be made material. He states:

Ho titled the project after his favourite author, Hervé Guibert, another artist who died in 1991 from AIDS-related causes. I plan to read an excerpt from the Guibert book as well as analyze Ho’s approach to dealing with the material left after Kirby’s death.

This hybrid talk/lecture/reading will take place in the Gallery to view this series in person, and then move into the Cultural Centre Performance Hall for the video screenings.

At 3pm, the gallery will host a screening of Ho Tam’s Confessions of a Salesman (56 min, 2008) and The Visit (16 min, 2015). Comprised of 13 short works, “Confessions of a Salesman” features new, old and remixed pieces of the artist’s works from 1994 to 2008. Linked together through the autobiography of a fictionalized businessman, each thematic segment of the video explores facets of identity which constitute an Asian man in contemporary society. The overall fabric of “Confessions of a Salesman” also reveals the artist’s fascination with cataloging the everyday. Both playful and satiric, the artist creates non-linear narratives that evoke both individual and collective memory, from a deeply personal perspective, yet potentially universal kind of vision. In his signature style, Ho Tam intermixes high and low culture, alternating between his various roles as salesman, artist and everyman.

In “The Visit”, a man dressed in a 19th Century outfit finds himself in a strange world. Does he belong to the past, the future, or the present time? “The Visit” tries to explore the concepts of travel, expedition and migration.

Ho Tam was born in Hong Kong, educated in Canada and the U.S. and worked in advertising companies and community psychiatric facilities before turning to art. He practices in multiple disciplines including photography, video, painting and print media. His first video, The Yellow Pages, was commissioned by the public art group PUBLIC ACCESS for an installation/projection at the Union Station of Toronto in 1994/95. Since then Tam has produced over 15 experimental videos. He was included in the traveling exhibition Magnetic North: Canadian Experimental Video by Walker Art Center, Minnesota. His feature documentary film Books of James was awarded Outstanding Artistic Achievement (Outfest, LA) and Best Feature Documentary (Tel Aviv LGBT Film Festival). He also publishes several series of artist’s books and zines. Tam is an alumni of Whitney Museum Independent Studies Program, Bard College (MFA) and recipients of various fellowships and artist’s grants.

Kegan McFadden first delivered this lecture as part of programming facilitated by Also As Well Too (the Winnipeg-based artist book library) in conjunction the presentation of Ho Tam: Cover to Cover at Platform Centre for Photographic + Digital Arts. Known for his fondness of the anecdotal, Kegan’s writing has been commissioned by artist-run centres throughout Canada as well as published by Border Crossings, BlackFlash, Canadian Art, C, Fuse, Visual Arts News, among additional international journals and in these contexts has been translated into French, Inuktitut, Cantonese, and Spanish.