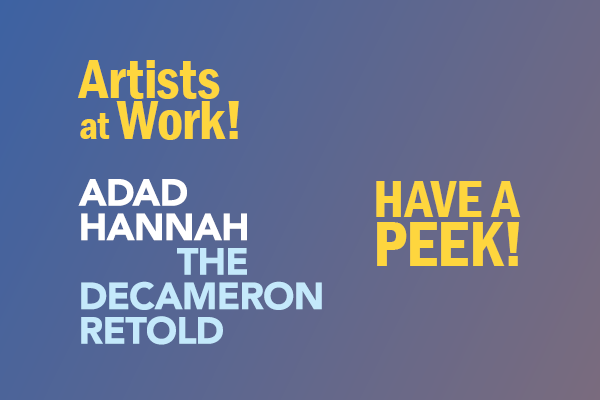 Visit the Richmond Cultural Centre Performance Hall (7700 Minoru Gate) on these dates from 2:00 – 5:00 pm to have a peek at the work in progress:

The project is based on the 14th century literary work, The Decameron, by Giovanni Boccaccio. It is a collection of novellas comprised of one hundred tales told over ten days by ten young women and men sequestered in a villa outside of Florence to escape the Black Plague.

For the exhibition Hannah is creating a series of video tableaux vivants using Boccaccio’s frame narrative as the departure point.  Known as living pictures, tableaux vivants were popular in the late 19th and early 20th centuries. Working with community members in front of and behind the camera, and incorporating local stories gathered through an open call, participants lay their own stories over The Decameron’s structure.

Hannah will work in the Performance Hall constructing the tableaux until January 24 when all the constructed pieces will be moved into the Gallery in preparation for the exhibition, The Decameron Retold.

All are welcome to join us on Saturday, February 9 from 2 – 5pm for the opening reception.