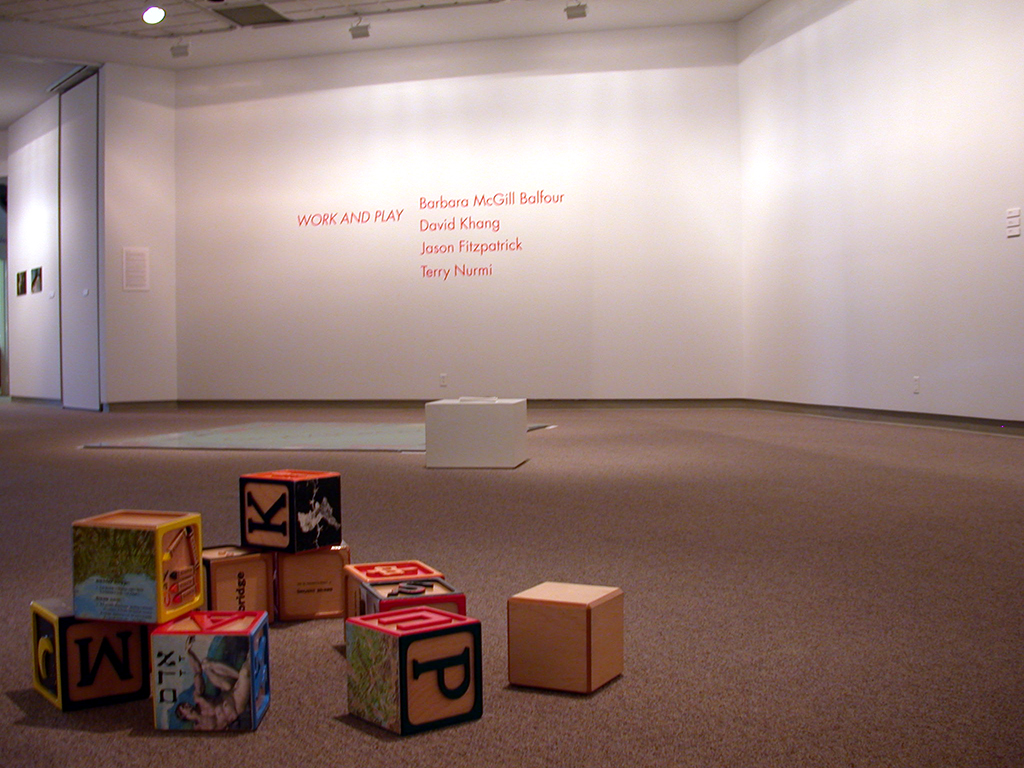 The two pieces by Jason Fitzpatrick included in Work and Play result from his background in the construction industry. As he says: The tasks involved in construction are numerous, repetitive and varied, none of them very light. Richard The II reminds us of the labour involved in not only building, but also in art-making, and Stanley manifests the intimacy with materials one finds through working in sculpture and construction. Jason Fitzpatrick is interested in the juncture of an experience/process; a physical exchange of energy and potential energy, built on his personal ethics and spiritual awareness.

Barbara McGill Balfour’s 24/7 is a meditation on the colloquial expression encapsulating the sense of ‘all the time’. Most often employed in terms of work, the labour of the body is invoked in the print series by overlapping sequences of fingerprints. The marks left by the hand also call to mind the practice of counting on one’s fingers. To produce this series, Balfour undertook a sequence of seven printings, each with seven sets of twenty-four fingerprints. Printed in a range of greys with a group of seven repeated each time, the states of the print reinforce repetition and monotony.

David Khang’s artwork transforms a part of the RAG into a playroom filled with interactive games. Several of these games examine new language productions in changing cultures. They involve word play, through which new words or hybrid languages are created. The audience is encouraged to become comfortable in interacting with the games. In many of the games, the process of play initiated by one viewer is left to be continued by the next visitor to the gallery.

Terry Nurmi’s work, Misfortunes, uses the device of a child’s game to consider identity and inheritance. It consists of 99 folded paper ’fortunes’, all focusing on that which is passed down. This work encourages us to contemplate identities which arise from our genes and/or our environment, and to question that which is brought to us by choice or chance.

Jason Fitzpatrick is currently doing his Masters of Fine Arts at the University of Windsor. He has his B.F.A. from Nova Scotia College of Art and Design, and has held an Independent Research position at Capilano College. He has received several grants including from the B.C. Arts Council, the New Brunswick Arts Branch, and the Canada Council for the Arts, and has been exhibiting since 1993.

Barbara McGill Balfour is an interdisciplinary and print media artist with an M.F.A. from Concordia University, an A.O.C.A. from the Ontario College of Art, and a B.A. from Smith College. She is Associate Professor and Head of Print Media in the Department of Visual Arts, York University. She has a long list of exhibitions, awards, and artist’s projects. Her artistic practice includes speaking and writing about art, participation with artist collectives, and involvement with the artist-run centres Galerie la Centrale and Open Studio.

David Khang is currently completing his M.F.A. at the University of California in Irvine with an emphasis in Critical Theory, and received his B.F.A. from Emily Carr Institute of Art and Design. He has also studied art in Seoul and New York, theology at the Vancouver School of Theology, and dental surgery and psychology at the University of Toronto. He has received many awards for his artwork and has been exhibiting since 1998.

Terry Nurmi received a Diploma from Emily Carr Institute of Art and Design in 1995, receiving scholarships for her work during that time. She has been exhibiting since 1993.