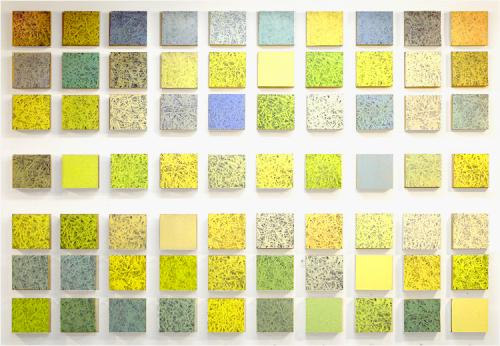 I grew up in the 1960’s in a Richmond subdivision called Richmond Gardens, a utopian enclave of cul-de-sacs and crescents. For my family and other first-generation Canadians there, the site and the era exuded an optimism about social progress and excitement about Canada as a nation. The subdivision’s continuous winding concrete curbs constrained any last vestiges of our rural pasts’ unruly landscape, and the cookie-cutter homes, for a time, erased our ethnic and economic differences. Eventually we would learn that difference, of many forms, had not, in fact, been overcome, and we would look back at the tidiness of our neighbourhood with disenchantment – but, for the time being, there was optimism. The era paralleled the explosion of modernism in Vancouver, and it seemed that to live within the subdivision’s concrete-patterned streets, treeless rectangular lawns, and box-shaped homes, was to live within abstraction itself.

There is a resurgence of earlier 60’s ideologies in the design of Richmond’s new mini-malls. The malls feature impeccably manicured islands of grass dotting a mostly concrete parking-oriented landscape. These are sites where the modernist import promises dreams – dreams teetering on the edges of the optimism we remember and the disappointment we’ve forgotten. The Grass Project hovers on this edge. The series of mixed media paintings are based on this suburban landscape, as sites of transformation between urban and rural spaces, between culture and nature, between promise and disillusion. The images not only figuratively reconstitute the soil-rich natural fields that had existed before Richmond’s development, but they also represent a modernist (and now technological) tidying up of chaotic nature.