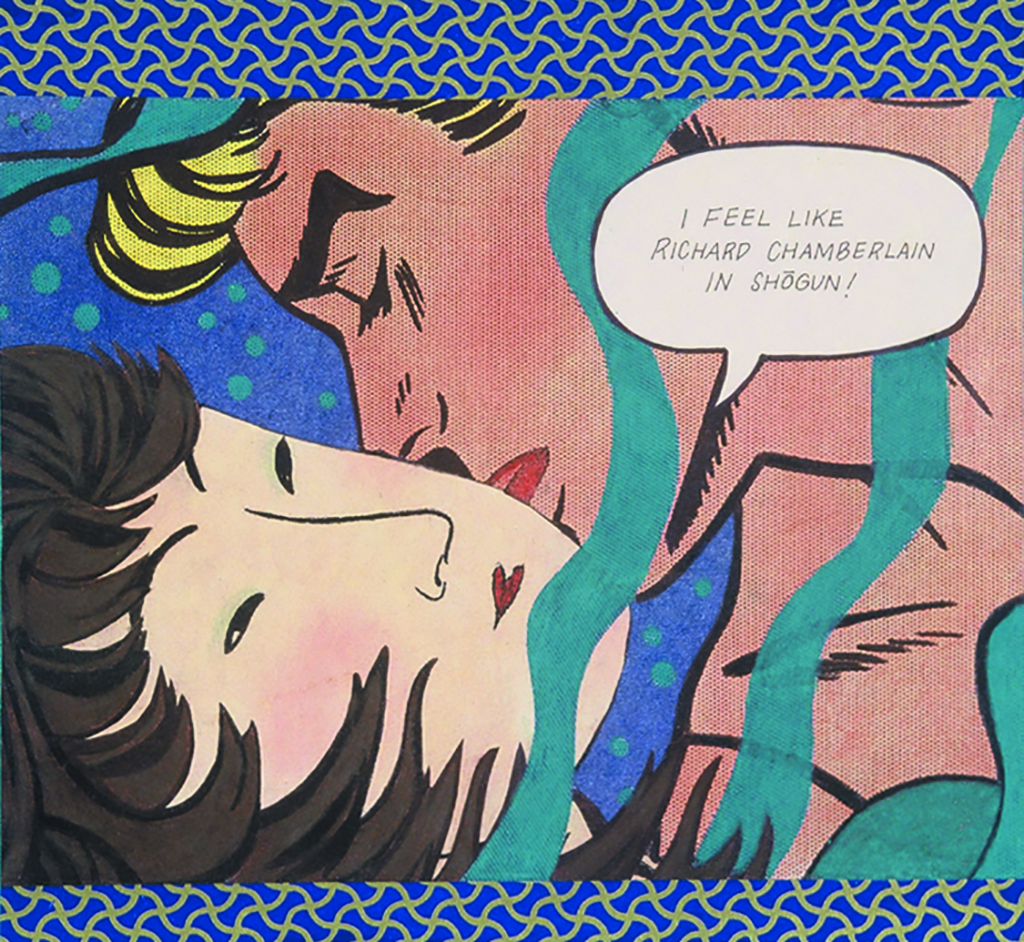 Michèle Provost’s work juxtaposes the traditional needlework technique of embroidery with current graphic images taken from urban popular culture. In the Victorian era, it was common practice for young women to display their skills by executing a sampler, a finely detailed rendition of the alphabet, sometimes adorned with quaint images: A is for apple, B is for bird etc. In these works that are often gritty in content, Provost draws from magazines, films, the Internet, and comic strips to visually convey different aspects of contemporary society. Each hand-embroidered piece is mounted in a box and illustrates one letter of the alphabet, with a companion text piece detailing something of our current way of life. The sampler: une histoire urbaine was created as a visual narrative, since visual images are used as a primary means of communication in today’s culture.

Sandra Sugimoto offers us a series of twelve neo-pop art scrolls depicting vignettes from her life growing up in Vancouver as a sansei, a third generation Japanese Canadian. From afar, the scrolls appear to be amusing as they are brightly coloured and striking, drawing imagery from eastern and western print traditions. However, upon closer inspection the viewer is confronted with uncomfortable dialogue and edgy content. The scenes and dialogue portrayed in the collages are autobiographical and depict events experienced by and words spoken to the artist. Sugimoto addresses themes of stereotyping, marginalization, and racial identity.

While these watercolours employ a traditional painting technique, their content is anything but conventional. Miranda J. Mallinson portrays familiar objects, such as shards of china, pieces of vintage linoleum, Peak Freans fruit cookies, coloured cartoons or illustrations from children’s books in what can best be described as still lives. Her compositions are presented from above so that they appear flattened. The artist is interested in the idea and effect of fragmentation, which is enhanced by this sense of flatness. The inclusion of the small broken objects becomes a process of reconciliation with loss. The paintings express a genuine love for the remnants themselves, and celebrate their inherent beauty, each part having a unique pattern and shape distinct from the original whole.

Michèle Provost studied woodcarving, photography, and printmaking in Norwich, England. She holds a diploma in visual arts from the Ottawa School of Art. She has exhibited extensively in Ontario and her work is part of major art collections, including the Canada Council Art Bank, Loto-Québec and the cities of Ottawa and Gatineau. The sampler: une histoire urbaine was recently purchased by the Canada Council Art Bank. She has received several grants including ones from the Council of Arts in Ottawa, Prix de la relève-Fondation pour les arts, les letters en Outaouais, and the Canada Council for the Arts. She has been exhibiting since 1994.

Sandra Sugimoto is currently a teacher in the Vancouver district and is completing the Diploma in Art Education at the University of British Columbia. She holds a Bachelor of Fine Arts from the Emily Carr Institute of Art and Design and a Bachelor of Education from the University of British Columbia. She has exhibited her artwork in both Canada and Japan.

Miranda J. Mallinson holds a Bachelor of Fine Arts from the Nova Scotia College of Art and Design. She has exhibited extensively in Vancouver, and has provided artwork for the Vancouver Public Library and the television series Weird Homes. She has been exhibiting since 1987.