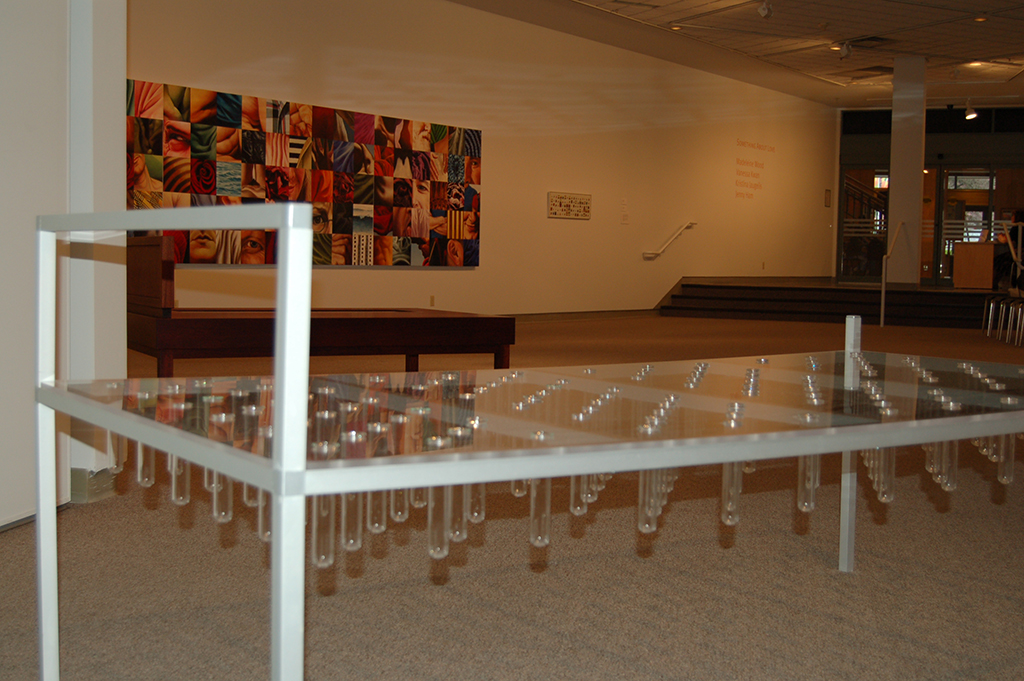 What is the impact of love on our lives?   How do individuals undertake and maintain relation- ships?  What objects do we associate with our feelings of love and longing?  This exhibition offers engaging variations on the subject of love, presenting notions of romantic love, self-love and preservation and pop culture-imposed standards of love and desire.  The four Vancouver-based artists in the exhibition are all women and approach the subject of love from a female perspective.

Over the past few years Madeleine Wood has been concerned with romantic relationships and their impact as an energizing force in our lives. She depicts the human body and clothing with elements to evoke sensual memory and conflicting states of human interaction: warmth, coolness, proximity, distance, arousal and indifference. Wood creates a selective personal history through her patchwork of paintings, representing an accumulation of emotional attachments which are often charged, passionate and sentimental.

Vancouver-based artist, Vanessa Kwan, is a multidisciplinary artist who has taken up such subjects as artifice, representation’s failure, the pervasive influence of pop imagery and the dynamic relationship of love and physical desire. Her work often embraces meticulous repetition as a means to negotiate the relationship that exists between nostalgic desire and mass production. For this exhibition, Kwan creates her Love Objects out of common household items such as cast-off toys and clothing, balls of string and other found objects to present an alternative to traditional love tokens. The artist describes these objects as “surrogates for contemporary emotional experiences”.

Kristina Jaugelis takes a more objective stance on the nature of human relationships by exploring the intersection of power and vulnerability with gender, sexuality, the body and domesticity. Her life-size sculptures take the familiar form of the ‘bed’ revealing this domestic icon as a site where many anxieties can surface. Jaugelis examines the lengths to which people go to ensure their own security from outside forces and perceived threats. Through her sculptures, she presents the bed as a staging ground for drama, a place where fears surrounding sexuality, mortality and the body converge.

Jenny Ham uses video, installation and performance to explore the intricacy and depth of her Korean-Canadian heritage. For this exhibition, Ham uses neon to form the words: “home sweet home”. The love or longing she is interested in is underscored by cultural alienation. She fuses elements of home, nostalgia and memory in order to create a space where the past, present and future can occur simultaneously. home sweet home will be shown in the Minoru window, a venue that her work has occupied during an exhibition at the RAG in 2000.

ARTIST BIOGRAPHIES
Madeleine Wood has exhibited extensively in the Lower Mainland and in Montreal. She received a diploma in Fine Arts from Emily Carr Institute of Art and Design in 1993 and a Master of Fine Arts from Concordia University in 1996. She has been involved in the local arts community in various capacities, as an instructor, curator, facilitator and presenter.

Vanessa Kwan received a degree from the Department of Integrated Media at the Emily Carr Institute of Art and Design in 2004. Her video work has been screened in Vancouver, Tucson, Arizona and Chicago, Illinois. She is involved with local artist-run culture, exhibiting work, participating in collaborative performances and as a board member for Artspeak Gallery and Gallery Coordinator for Access Artist Run Centre in Vancouver.

Kristina Jaugelis is a recent graduate from the Fine Arts program at Simon Fraser University. Her practice encompasses sculpture, photography and performance. She has participated in exhibitions around the Lower Mainland since 2001 and was recently included in a group exhibition at the Walter Phillips Gallery in Banff, Alberta.

Jenny Ham is originally from Vancouver, and has based her artistic practice in New York City since 2002. She received a Bachelor of Fine Arts from Simon Fraser University in 1999 and a Master of Fine Arts from Hunter College, City University of New York in 2003. She has exhibited extensively since 1999 with exhibitions in the Lower Mainland, New York, Berlin and in The Netherlands.