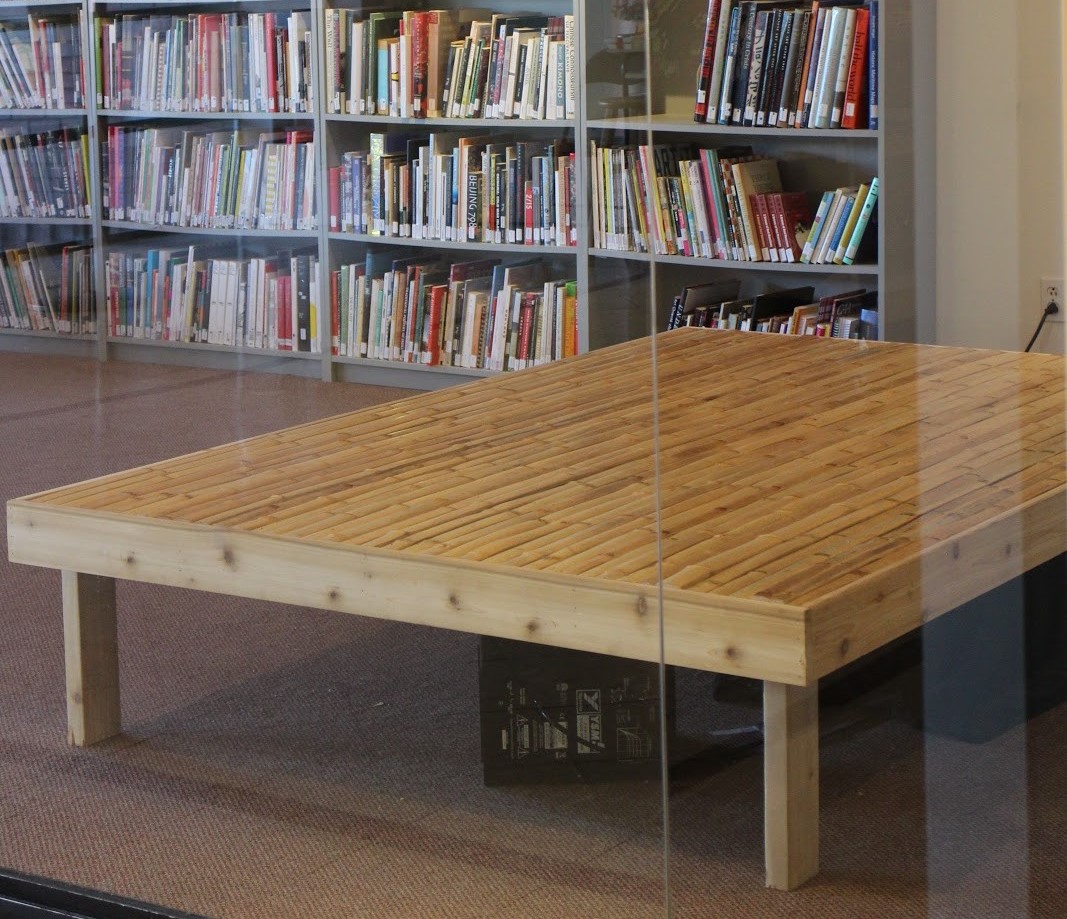 Readings and Performances start at 7:00 pm.

Christian Vistan’s installation, ‘Papag’, featuring a custom built 7 x 5.5’ papag, a Filipino bamboo daybed, accompanied by a sound work by Yu Su, temporarily sits in Richmond Art Gallery’s exhibition space. Emitting from beneath the papag, the sounds of mallets, gongs, and bamboo, interweave with field recordings from a mall, and a Canto pop song. This score alludes to the papag’s construction and its original installation at a storefront reading room at Centre A in a mall in Vancouver’s Chinatown. At Richmond Art Gallery, ‘Papag’ echoes a reminder of the social ambience and bustling activity of nearby malls and community hubs, CF Richmond Centre, and Richmond Cultural Centre itself.

Occupying a liminal space adjacent to the two galleries in Richmond Art Gallery, the papag offers a place for pause, to sit, to read, to listen, and to converse. As a common seating structure, the papag assembles a public, putting forth a surface for interactions, words, thoughts, and conversations of its sitters.

In the spirit of this assembly, artists and writers were invited to contribute words, thoughts, and impressions to a publication entitled ‘Pa-pag-page’ organized and edited by Christian Vistan and Shizen Jambor.

Simon Grefiel is an artist born and raised in Tacloban City, Philippines currently living on unceded traditional and ancestral lands of SȾÁUTW̱ (Tsawout), q̓ic̓əy̓ (Katzie), qʷa:nʎan (Kwantlen), and sc̓əwaθenaɁɬ təməxʷ (Tsawwassen) First Nations. He is currently working on projects in thinking about listening, voice, rituals, ecology, spirits, ceremony, tugtug (music), and folk interpretations to major religions in the tropical islands of Southeast Asia and the Pacific. Grefiel explores how anthropological and ethnolinguistic information is disseminated in the English language and engages in reframing through contemporary platforms. He was Education Coordinator at Centre A and currently volunteers to develop an artist database for Centre A’s reading room that includes the Fraser Finlayson Collection of rare books on Classical Chinese and Japanese Art Finlayson Library. In partnership with Simon Fraser University, Library, Special Collections, he helped digitally archive publications for Rungh, a South Asian Quarterly of Culture, Comment and Criticism that produced physical magazines from 1992-2000.

Stacey Ho is an artist, writer, and curator living on the unceded Coast Salish territories of the xʷməθkʷəy̓əm (Musqueam), Sḵwx̱wú7mesh (Squamish), and səl̓ílwətaʔɬ (Tsleil-Waututh) peoples. Their practice considers intersections of culture, history, and embodied experience from a feminist perspective. Informed by a background in photography and performance art, they often incorporate language, sound, and gesture into their work. They also spend a lot of time thinking about math, plant medicine, and perfume. With collaborator Elisa Ferrari, they generate graphic scores, workshops, and interventions that investigate the relationship between sound and place. Stacey has notably presented work through Art Metropole (Toronto), Galerie oqbo (Berlin), RAM Galleri (Oslo), the University of Toronto’s Justina M. Barnicke Gallery, and at the Vancouver Art Gallery’s FUSE. Their creative and critical writing has been published through Modern Painters, c magazine, West Coast Line, INTER: art actuel, Dysfyction, The Capilano Review, Charcuterie, VIVO Media Arts Centre, and the Kitchener-Waterloo Art Gallery. They organize Slow Wave Small Projects, a one-week feminist, land-based retreat on Mayne Island. They are currently sleeping a lot and writing a story about aliens.

Shizen Jambor is an artist and curator based on the unceded territories of the xʷməθkʷəy̓əm (Musqueam), Sḵwx̱wú7mesh (Squamish), and səl̓ílwətaʔɬ (Tsleil-Waututh) peoples. Ambiguity, reflexivity, satire, and performativity all play important roles in her practices. Curatorially, she is interested in artists who work responsively and who employ criticality, absurdity, and reflexivity as modes of intervention and disruption against naturalized structures. Jambor holds a BFA from Emily Carr University of Art + Design, and is the Assistant Curator at Centre A. Recent curatorial endeavours include C. Spencer Yeh: Mei-Jia & Ting-Ting & Chih-Fu & Sin-Ji, the group exhibition Bad Flavour, Wonderful Taste, and How To Win Friends and Influence People, a performance and talk with RJ Basinillo all at Centre A. In 2018 she exhibited The Influencers, a video work made in collaboration with Olga Abeleva, at Duplex.

Christian Vistan is a Filipino Canadian artist originally from Bataan, a peninsular province in the Philippines. He is currently based out of both Delta and Vancouver, BC. In his work, he observes his body with its particular set of histories and materials move through spaces with their own set of histories and materials: language, colonizations, industry, labours, migrations, narratives, and familial histories. He makes paintings, texts, and installations as a way to think about his continuous hybridity and the embodied processes and experience of displacement and diaspora. His work has been shown in Canada, US, and Philippines at Centre A and Artspeak in Vancouver, Plug In ICA in Winnipeg, GUM in Ladner, BC, Kamias Triennale in Quezon City, mild climate in Nashville, and Atlanta Contemporary Art Center in Atlanta. From 2016 – 2017, he held the position of Curatorial Assistant at Centre A, Vancouver International Centre for Contemporary Asian Art, where he curated and contributed to various projects and exhibition. From 2017-2018, he took part in the Studio for Emerging Writers at Artspeak where he published his chapbook ‘a lot, a lot’.

Kaifeng-born, Vancouver based Yu Su arrived as a sound artist and composer by corresponding audible elements freely between the cosmological Daoist mandate and the ecological properties of the Pacific Northwest.  Tapping into an expansive repertoire of New Age, library music, meditative jazz and house, Yu Su’s emotion-packed compositional punches are best described as organically groovy jazz-bient expeditions between coasts.  Presented through various art institutions and galleries, she delivers intensive studies on acoustic soundscape, cultural exchange, and an ongoing response to the history of ambient music.  Recent commissioned projects and installations have included performances at FUSE (Vancouver Art Gallery) and Western Front, Mutek Montreal (Société des Arts Technologiques), fellowship at artist-run-centre 221A and concert at Contemporary Art Gallery in Vancouver.