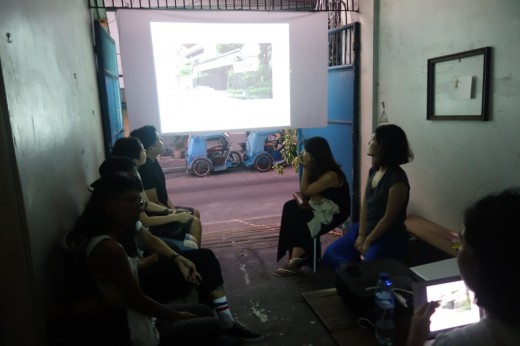 Join Mark Salvatus & Mayumi Hirano from Load Na Dito (Manila, Philippines) with Bopha Chhay, Allison Collins and Shaun Dacey from Pacific Crossings for a conversation discussing ongoing various artistic connections and exchange between Manila and Vancouver. Load Na Dito and Pacific Crossings will discuss the work they do in hosting and nurturing residencies and projects in their home cities.

Load Na Dito will speak about their artistic and research based project based in Manila, Philippines. Developed as a homemade culture, it uses a variety of different spaces as a site for knowledge sharing, inquiry and discussion. The name “load na dito” is borrowed from a popular top up system for cellphone credit in the Philippines, where you can load up credits anywhere you see the sign “load na dito.” This project is a model that allows ts founders to develop projects in different locations—building new energies to have and maintain “load”.

We welcome people who would also like to share their connections, practices, projects to join the conversation.
Free drop-in. Snacks and tea will be served.

Biographies:
Mayumi Hirano is an independent curator, researcher and translator based in Manila and Osaka, Japan. She is the co-founder of a multi-disciplinary space 98B COLLABoratory where she was the head of educational program, until 2018. After her curatorial practice at Yokohama Triennale (2005) and Koganecho Bazaar (2008-2013), her research and practice continues to focus on the relationship between art and society. She is currently focusing on developing educational programs that facilitate experimentations with various ideas by using creative mediums. Mayumi was an Asian Public Intellectuals Fellow (2013-2014), and worked as a researcher for Asia Art Archive, Hong Kong (2007-2008).

As a space that connects but is not determined by any one people or place, the Pacific Ocean is a fluid region. Our engagement through it imagines the alliances, meeting points or crossing of paths that can take place and where mutual influence, responsibility and care come to build and sustain a shared body of work and practices. Pacific Crossings is an ongoing conversation and public presentation series that draws participants from various regions across the ocean. This collaborative project works to bring together perspectives in an evolving and dynamic exchange, instigating events and activities that can increase public awareness of the multitude of traditions, histories, and practices, offering potential routes for intersection to take place. Thinking both metaphorically and ecologically, the series will address the care and consideration that must emerge for long-term healthy exchange, and the sharing in responsibility as much as resources.