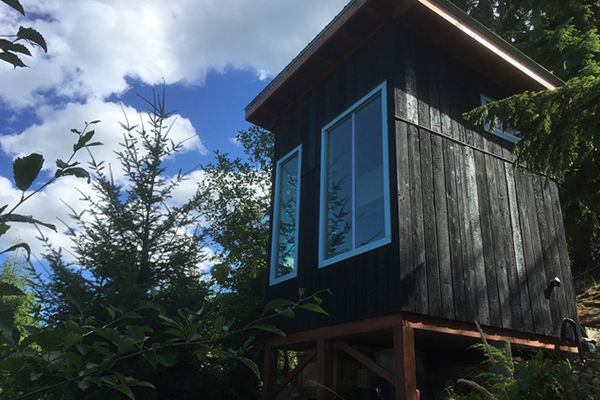 In conjunction with the exhibition Germaine Koh: Home Made Home, learn, discuss and share information on small house living with local artists, planners, historians and activists. The overall symposium highlights creative approaches to housing alternatives and ways cities may develop in the future.

Session 1:  Historical Perspectives: How Did We Get Here?

Free Admission, but registration required due to limited seating. Register via Eventbrite here.

Opening reception of Germaine Koh: Home Made Home to immediately follow the symposium from 7:00 – 9:00 pm.

Dr. Leonora Angeles is Associate Professor at the UBC School of Community and Regional Planning and Institute for Gender, Race, Sexuality and Social Justice. She has taught at various universities and colleges in the Philippines where she helped pioneer women’s and gender studies and developed interdisciplinary and participatory action research projects. Her most recent co-publications are on “Emotions, Empathy and Entangled Engagements” and the use of creative-critical methodologies in transnational spaces,”Worlding Resilience” and immigrant integration challenges in Metro Vancouver.

Denise Cook is a heritage conservation planner who has led or participated in numerous heritage projects across B.C. and Yukon. Denise has worked for all three levels of government in Canada, and has been involved in a variety of projects that have led to the identification, documentation, and protection of sites of local, regional and national heritage significance. She is currently completing a Professional Specialization in Ecological Restoration at UVIC, with a focus on the relationships between the natural environment and cultural heritage conservation.

Terry Point is from the Musqueam First Nation and works with the Richmond School District as an Aboriginal Support worker. He studied First Nation Studies at UBC and holds a BA in Arts. As a student he worked for the Museum of Anthropology for 4 years working on the Reciprocal Research Network and the Coast Salish Gallery in the Multiversity Gallery. He also worked in the Treaty Lands and Resources Department of the Musqueam Indian Band for 8 years as a researcher where he did a lot of public programming and outreach.

Dr. Nathanael Lauster is an associate professor of Sociology at the University of British Columbia and the author of the award-winning book, The Death and Life of the Single-Family House: Lessons from Vancouver on Building a Livable City. He writes and researches on issues of housing, home, immigration, family, population, and urban sociology, and he regularly blogs at homefreesociology.wordpress.com.

David N-Dorrington has been working as an artist since 1970 and is currently working on a series that can be found on YouTube (David Dorrington ArtMusic). David has lived at and been working to save the community of Finn Slough and the wetlands surrounding it for the last 30 years.

Caitlin Jones is currently the Executive Director of the Western Front in Vancouver, B.C. During her six years at the Western Front she has curated a number of exhibitions, most recently Urgent Imagination: Art and Urban Development, and has spearheaded, planned, fundraised and executed the institution’s purchase of the Western Front’s historic building. Prior to this she worked at the Solomon R. Guggenheim Museum, Rhizome.org, Bryce Wolkowitz Gallery (New York) and as an independent curator.

Tiny House Warriors: Our Land is Home is a part of a mission to stop the Kinder Morgan TransMountain pipeline from crossing unceded Secwepemc Territory. Ten tiny houses will be built and placed strategically along the 518 km TransMountain pipeline route to assert Secwepemc Law and jurisdiction and block access to this pipeline. We are going big, by going small, and our first tiny house build date is set for the September 5-8th at Neskonlith (near Kamloops). The Tiny House Warrior movement will be the start of re-establishing village sites and asserting our authority over our unceded Territories.

Germaine Koh is a Canadian visual artist based in Vancouver. Her work is concerned with the significance of everyday actions, familiar objects and common places. Over the course of Koh’s 25-year practice she has begun to consciously shift her work outside of the gallery and into the realms of public interventions and community-based activities. Recently Koh became the City of Vancouver’s first Engineering Artist in Residence.

Anastasia Koutalianos is a communications strategist, writer/editor and project manager. Anastasia firmly believes in community building and strategic thinking as tools for inspired change; she is also passionate about sharing our collective wisdom through healing practices and the arts. Anastasia is the co-founder of the BC Tiny House Collective, and owns and runs her own communications firm, nadatodo Communications Inc. bctinyhousecollective.com | nadatodo.com

Irwin Oostindie is a Dutch/Canadian media artist, curator, and researcher who has led international and local media and culture projects for three decades. He has operated a dozen cultural space projects and produced two thousand events and forty festivals which focus on social justice, cross-cultural dialogue, and creative technology. Irwin has worked in both the grassroots and with settler and First Nation governments, plus international networks and organizations, such as the United Nations University for Peace. He is a podcast/FM radio producer and radio host with @W2Media and Democracy North.

This event is supported by a Canada Council for the Arts project grant.