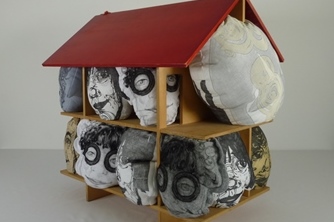 Aimée Henny Brown, Saskia Jetten, Ross Kelly, and Colin Lyons will introduce their art practice and discuss their process for their works in the Transference exhibition. The exhibition investigates the aesthetic and formal criteria specific to contemporary print media, while highlighting challenges and opportunities digital technology presents to the function and process of the medium and its contribution to the conceptual construction of artworks. Underlying the works is the notion of image transfer as well as the transference of meaning supported and sometimes led by digital technologies.

Born and raised in Western Canada, Aimée Henny Brown completed her undergraduate degree in Fine Arts at the University of Alberta, focusing on print and book media. After moving to Halifax, Nova Scotia, in 2005, she obtained her Masters in Fine and Media Arts at NSCAD University in 2007. She has received several awards and grants, notably the Joseph Beuys Scholarship for Artistic Merit and several Canada Council Production Grants. Her performances and bookworks have been featured at the AGO presentation space and Vancouver Art Book Fair.

Saskia Jetten is a contemporary Dutch printmaker who immigrated to Canada a few years ago and now resides in the Fraser Valley. She holds an MFA from the Royal Academy of Art (The Hague). Jetten has received numerous prizes, most notably the ‘Grafiek Nu 10’ Dutch Printmaking Award and the Alain Piroir Studio Residency Prize in Montreal, Quebec. Her works have been exhibited at the International Contemporary Print Biennale in Trois Rivieres, Quebec, and at the International Print Center New York (IPCNY).

Ross Kelly is an Irish born Vancouver-based artist who has Master of Applied Arts Degree, from Emily Carr University of Art and Design, and a Diploma in Photography from both Focal Point School of Photography, Vancouver, B.C and New York Institute of Photography. He has recently exhibited at Charles H. Scott Gallery, Art Beatus Gallery, Gallery 295 and The Remington Gallery.

Hannamari Jalovaara is a Vancouver-based visual artist and independent curator. She holds an MFA from Emily Carr University of Art + Design, a double Master’s degree in Aesthetics and Art Education, as well as a degree in Art Therapy. Her print media works have been exhibited internationally in numerous juried and touring shows, and are included in both public and private collections. As an artist employing traditional and emerging printmaking technologies, this curatorial project continues Jalovaara’s own research and provides opportunities for further investigation and dialogue between artists whose artistic output, materially and conceptually, is shaped in part by new technologies.