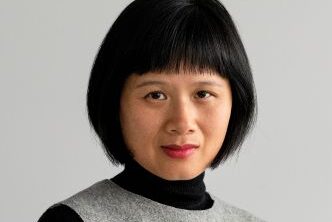 Utilizing digital techniques and photography, Chun Hua Catherine Dong’s work illustrates the rich symbolic value of Chinese textiles to explore issues of gender and culture. The phoenix and dragon are interconnected symbols in Chinese culture and are often used together to symbolize auspicious and blissful relations between husband and wife. In ancient Chinese history, the phoenix could be male or female. However, as the dragon became associated with Chinese emperors as an imperial symbol, the phoenix became exclusively associated with female identities. Within this diptych installed at Aberdeen Station, Dong envisions the phoenix and the dragon not as opposites but as mirrors of each other. Adding her own twist to a traditional medium, the artist uses blue to return masculinity to the phoenix and plum blossoms to offer femininity to the dragon. By placing these symbols within the rainbowed sea and mountain patterns, the artist suggests a contemporary perspective on Chinese tradition.

Each image is animated with augmented reality through a free app that can be downloaded on a mobile phone or tablet. Once the image and sound are activated, graphic elements begin to dance, paired with an ethereal score of traditional Chinese music.

Session Format:
This session is a free live-streamed webinar on the Zoom platform.
New to Zoom? Learn how to register and attend a webinar here »
Live transcription/closed captions in English will be included during the live-stream via the Otter.ai platform.
Join in the conversation by typing in your questions in the chat feature on Zoom.

About the Artist:
Chun Hua Catherine Dong is a Chinese-born Montreal-based artist working with performance, photography, and video. She received an MFA from Concordia University and BFA from Emily Carr University Art + Design. She has exhibited works in multiple national and international venues, such as Quebec City Biennial, MOMENTA | Biennale de l’image, Kaunas Biennial, The Musée d’Art Contemporain du Val-de-Marne in Paris, Museo de la Cancillería in Mexico City, Canadian Cultural Centre Pairs, the Museum of University of Toronto, HuBei Museum of Art in China, and so on. Among many other grants and awards, she was the recipient of the Franklin Furnace Award for contemporary avant-garde art in New York (2014), and listed the “10 Artists Who Are Reinventing History” by Canadian Art (2017). She was also named Artist of the Year at the DongGang International Photo Festival in South Korea (2018), and a finalist for Contemporary Art Award at Le Musée national des beaux-arts du Québec ( Prix en art actuel du MNBAQ) 2020.