An opportunity to explore the meaning of art Su-An Yun 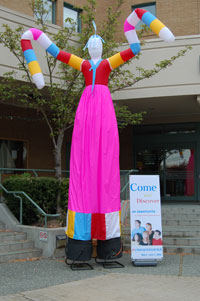 Richmond-based artist Su-an Yun’s work raises important questions about the function of art in our society and the role artists play within communities. Notions of self-identity that address immigrant experiences of displacement, marginalization and a potential inability to engage in personal expression are also central to her practice. The questions she raises address her desire to foster a critical engagement with the local community. Yun employs familiar advertising media such as inflatable figures, stickers, banners and video-based advertising to critically address these issues through the use of satire and “twisted humour”.

ARTIST BIOGRAPHY
Su-an Yun immigrated to Canada from Korea in 1987 and currently lives in Richmond. She received a diploma in Fine Arts from the Emily Carr Institute of Art and Design in 1993 and a Master of Fine Arts from the University of Windsor in 1996. She has exhibited in exhibitions in Canada and Korea since 1993.