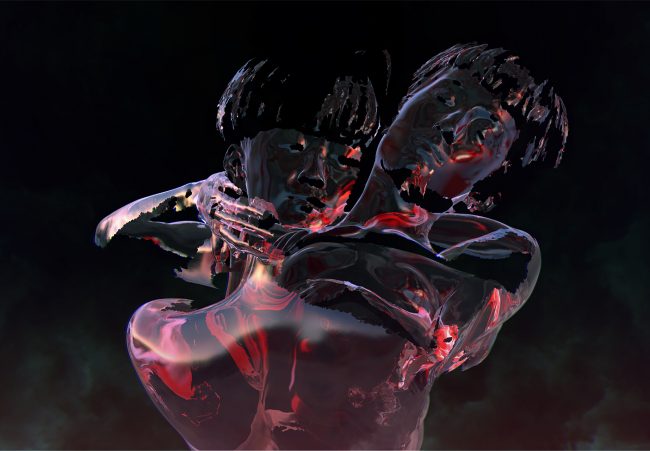 Featuring a new body of works created by interdisciplinary media artists Nancy Lee and Kiran Bhumber, UNION is a speculative sci-fi exhibition centred around a narrative of two beings discovering their ancestral memories through the longing for touch and the rituals practiced in their post-apocalyptic wedding ceremony. The exhibition incorporates XR, performance, sculpture, multi-channel sound and video installation. Drawing on parallels between our world and the speculative future while working through the artists’ diasporic identities, UNION is a potent critique of modern surveillance capitalism, but also a gesture towards hope through the generative possibilities of intimacy, performativity, and presence.

Nancy Lee is a curator of interactions. Her crafted spaces stimulate behavioural dynamics, inviting their release into a broth of intangibles. In setting the stage for these action experiments, she is as much an observer as an artist. The notion of staging is a constant in Nancy’s work and underpins her projects from early days as a more traditional filmmaker, through her conception and planning of live events, and into the realms of VR, new media performance and installation, where her art practices continue to coalesce and evolve. Nancy recently co-created VR projects “Telepresence”, a VR 8-channel surround sound live performance with Western Front Society and “Tidal Traces”, a VR dance film with the National Film Board of Canada. Nancy’s films and interdisciplinary performances have showcased at Cannes Film Festival, SXSW, MUTEK Japan, Bass Coast Festival, Alberta Electronic Music Conference, Vancouver International Jazz Festival, International Symposium on Electronic Art (Vancouver, South Africa and South Korea), and more.

Kiran Bhumber is a media artist, composer, musician and educator based in Vancouver, Canada. Kiran constructs interactive installations and performance systems that allow performers and audiences to engage with themes relating to cultural memory, embodiment and nostalgia. She has performed and presented her works throughout North America, Asia, Europe and Australia including conferences and festivals such as MUTEK, The International Symposium on Electronic (ISEA), The Toronto International Electroacoustic Symposium, Vancouver International Jazz Festival, International Conference on Live Coding, and New Interfaces for Musical Expression (NIME).