The trees weep, the mountain still, the bodies rust 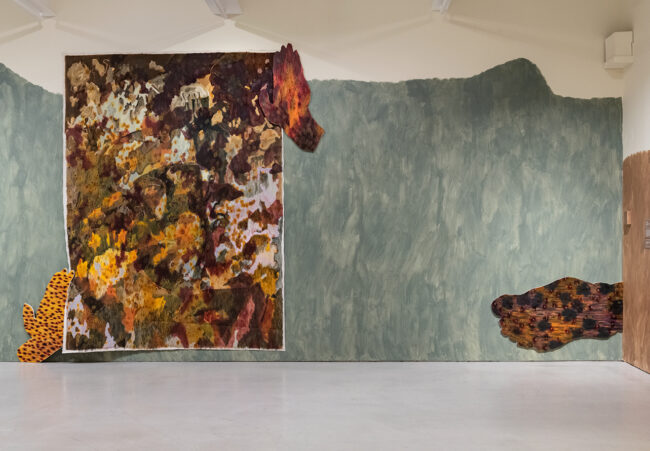 The trees weep, the mountain still, the bodies rust features a new body of work by Derek Liddington in which the genre of landscape is the central focus. Having turned away from performance and drawing in recent years to explore the medium of painting, Liddington examines how we experience the landscape rather than how we see it. He challenges the material limitations of the canvas with strategies that seek to capture transformation and movement. By doing so, he confronts the historical canon of painting as a way to reconsider its legacy.

Liddington’s dense canvases visually translate the idea of immersion in a forest so dense our sense of orientation is hindered. Forests are worlds formed of multiple layers, not unlike the artist’s painting process. In his compositions, there are no visual clues to prioritize important elements; the rules of perspective that usually guide our gaze are discarded in favour of emphasizing the surface. As such, the essential character of each part of the composition is emphasized, from the most imposing to the most humble. In nature, a forest’s height and depth are organized according to an invisible logic: the ground’s humus contains complex life forms that are essential to the regeneration of an ecosystem that is also built up in layers, with old growth forests literally growing on the edge of one another. It’s difficult to locate oneself spatially and temporally in this type of environment because the logic that governs it is beyond our comprehension. Imagining ourselves in the forest involves the question of scale: the body and the temporality of human life become standards of measurement that allow us to put this world into perspective in order to better understand it and our relationship to it. But perspective—something these paintings don’t rely on in a traditional way—requires stepping back to visually embrace the scene as a whole and capture its spirit. The experience of a forest hampers this reflex, or at least complicates it by reminding us that we live in an all-encompassing and interconnected world in which self-abstraction is impossible, other than to delude ourselves.

As a representation, the forest translates a relationship to the world that is the opposite of gazing out from the shoreline to the infinite horizon of the sea. Although the sight of such vastness might feel vertiginous, a certain sense of authority comes from having one’s feet firmly planted on the ground. But at the heart of a forest, reference points become blurred, perceptions are confused, fears are awakened. What’s that shape over there? Is it an animal or just the shadow from the canopy of trees? And is that a foot I see between the leaves, or just the outline of hills in the distance? Liddington plays with these illusions by revealing the artifice behind his paintings’ construction, the way they assert their flatness and bring us back to their material nature. By imagining ourselves outside of the forest, separate from the ecosystem that supports us, we adopt the viewpoint of someone who asserts their independence at a remove from their surroundings. It means that we avoid questioning the logic of extraction that has guided us until now and that has caused environmental consequences we’ve only just begun to understand. By systematically bringing us back to the surface, to what is closest to us, under our nose, Liddington shows that proximity isn’t always synonymous with clarity; it can often lead to disintegration and abstraction. Perhaps this is a comment on our current times, where decisions are often seemingly made with only short-term effects in mind because considering the bigger picture is so complex that it feels paralyzing.

The trees weep. The bodies rust. The mountain, still, seems imperturbable. And yet, what is this camouflaged giant if not a sign of imminent danger, of the insatiable appetite of the capitalist system we have created? Like a fable, this exhibition weaves a narrative whose uncertain outcome hints at the chaos of moral disorder. We’ve been warned.

Derek Liddington (b. 1981) lives and works in Toronto. After obtaining a BFA from Nova Scotia College of Art and Design where he focused on video and performance, Liddington completed an MFA at Western University in 2007. Liddington’s practice holds a continuous interest in cultural memory and its iterations through abstraction, representation, and modernist forms of visual language. Liddington’s work has been exhibited nationally and internationally, including performances in Athens, Greece and Onagawa, Japan, and select presentations in Toronto (AGO), Madrid (ARCO), Berlin (Art Berlin Contemporary), and New York (Frieze Art Fair, NADA). Liddington has had solo exhibitions at Cambridge Galleries (Ontario, Canada), SAAG (Lethbridge, Alberta), AKA Artist Run Center (Saskatoon, Saskatchewan), and the AGYU (Ontario, Canada); most recently, his exhibition The trees weep, the mountain still, the bodies rust opened at Musée d’art de Joliette. Liddington has been the recipient of numerous public and foundation grants, including support from the Toronto Arts Council, Ontario Arts Council and Canada Council for the Arts as well as being a finalist for the Toronto Friends of the Visual Arts. Liddington’s work is represented by Daniel Faria Gallery (Toronto).

Anne-Marie St-Jean Aubre is the Curator of Contemporary Art of the Musée d’art de Joliette since 2017. She programs and curates the contemporary art exhibitions, develops the exhibition tours, and organizes the performance and dance residencies. Her research explores how identities are constructed at the intersections of several discourses, including culture, gender, sex, and race. She holds a Bachelor of Arts in Visual Arts and French Literature from the University of Ottawa and a Master’s degree in Art History from the Université du Québec à Montréal.

The artist gratefully acknowledges the support of: