Ray Gunz and other Cool Stuff 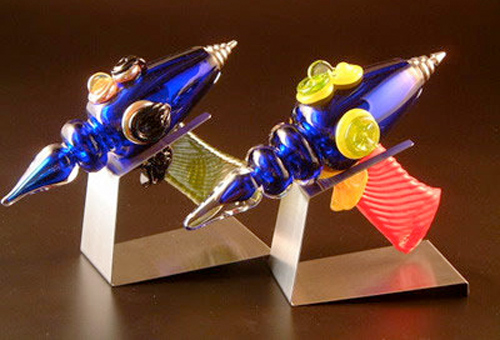 Jeff Burnette, an award-winning glass blower and a founding member of the Vancouver artists’ cooperative, V6, has created a stunning series of blown glass ray guns to inspire the kid in all of us. “Growing up in the early 60’s,” says Burnette, “I was entranced by the science fiction serials and cliff hangers of the 40’s and 50’s. The fantastic weaponry and pseudo-science captured my imagination and I developed a love for the ray guns and comics of the era.” The result is Buck Rogers in blown glass. Born of a fascination with the past, coupled with a stylish vision of the future, the space-age series is accompanied by the artist’s own collection of antique metal and plastic ray guns, 50’s comics, and spaceman memorabilia. Jeff Burnette shows us the beauty inspired by Buck Rogers and Ming the Merciless, resulting in a complex meditation on the relationship between media and the construction of gendered identity.