A Practice in Gestures 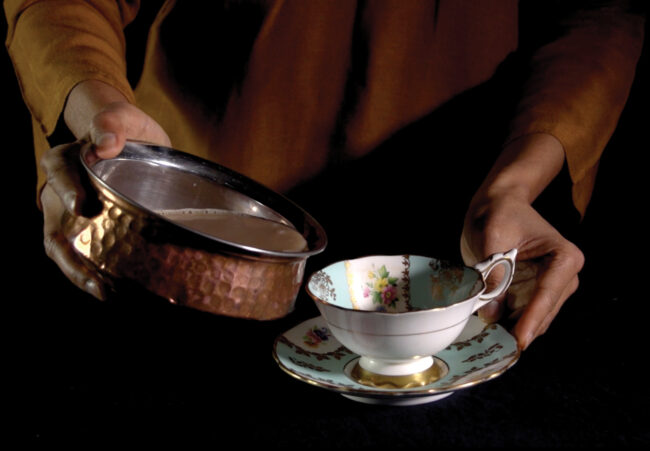 Above: Farheen HaQ, "Drinking from my mother's saucer", 2015, video still. Courtesy of the artist.

A Practice in Gestures draws together works by six artists living and working in BC ¬– Farheen HaQ, Deborah Koenker, Bev Koski, Mitra Mahmoodi, Bettina Matzkuhn, and Barbara Zeigler. The exhibition includes textile works – beading and embroidery – video, ceramic, and mixed media.  The divergent works share a vocabulary of simple gestures rooted in domestic familiarity that give shape to meaningful rituals and practices while confronting colonial and patriarchal narratives as well as critical environmental imperatives.

Spanning decades, the artists’ practices range from emerging to over forty years. The selected works foreground the artist’s relationship with materials, their methodologies and the significance of gestures, rituals, and practices.   Centuries-old gestures and practices are recast and contemporized, and demonstrate the potential of small, intimate gestures to expand from the personal and poetic, to the globally relevant.

In her practice Farheen HaQ mines family history and trauma as a means toward healing and understanding. In the video Drinking from my mother’s saucer, (2015) HaQ endeavours to reconcile complicated childhood memories of her mother serving chai in a saucer, with the gift of a bone china teacup from her partner’s British grandfather. In her compact and arresting video, HaQ investigates the colonial practice of using buffalo bones in the production of bone china and its devastating consequences to Indigenous peoples. HaQ considers her complicity in colonization in Canada, and that of her own colonized ancestors. A second video work by HaQ, Fold (2015), captures intimate gestures of caring through the folding and swaddling of fabric.

Deborah Koenker considers the status of women’s work and the historical practice of excluding women from art studios and exhibitions in her elegant installation, Hanging By A Thread: Anonymous Re-Vision. The small hand-embroidered works – referencing needlework samplers – are based on photocopied details of 16th and 17th century ‘Old Master’ landscape drawings and engravings by male artists. In a subversive gesture, Koenker includes a number of embroidered works based on her own drawings into the installation. Begun in 2002, Koenker premieres this work of more than 130 embroideries with a new print series, Hanging By a Thread: Migrations. The prints are taken from the reverse side of the embroidered works – helter skelter threads charting vulnerable journeys.

In the series of beaded figures Bev Koski examines ways that Indigenous identities have been appropriated and represented through stereotypical portrayals. A consummate beader, Koski beaded over small figurines that were stereotypical representations of Indigenous people. Found in tourist shops and sold as toys and souvenirs, Koski collected the miniatures on her travels, as did friends on her behalf. The titles of the works indicate where they were purchased. In beading over the figurines, Koski erases their stereotypical representations. In the beaded covering she leaves an opening for the eyes to peer out, imparting a disconcerting impact. Also included is new beaded work, Are you still watching? Here, Koski gives us pause to consider the prompts that pop up on streaming services.  She gives a humorous nod to binge watching during Covid-19, though underlying the interrogative, more complex implications persist.

Mitra Mahmoodi examines her Middle Eastern and Islamic heritage through clay in the installation Aftabeh (2018). She employs the aftabeh, spouted pitchers traditionally used for cleansing and ablution, as a vehicle for exploring contradictions in the world of antiquity. Her assemblage of ceramic vessels, distorted and displaying impressions and marks made by the hand, recalls centuries of ritual. Fragments of poems, and passages from the Quran, written in Farsi are visible on portions of the aftabehs. The selected texts warn of displays of pretense or ostentation, favouring gestures of kindness and compassion.

Bettina Matzkuhn’s installation of handmade lifejackets, SOS (2018-19) highlight the vulnerability of refugees and migrants. A daughter of refugees who immigrated to Canada in the early 50s, Matzkuhn inherited her parents’ appreciation for the natural world.  SOS is comprised of seven lifejackets; their interior linings elaborately embroidered with landscapes representing Peace, Shelter, Work, Water, Freedom, and Beauty. Displayed upright they function as immigrant proxies, huddled together. The lifejacket, an iconic symbol of migration in the 21st century, underlines the despair of people fleeing. Highlighting the refugee crisis caused by the effects of global warming, Matzkuhn suggests that nature too, requires rescuing. Also included are three newer embroidered works of de-constructed backpacks from a series, Gear (2020-21) that explore the conflicting needs of humans and the environment.

Barbara Zeigler presents two closely related works – the video installation, Passage II, and Totally Cracked, a floor-work comprised of eggshells and river rock, which are part of the ongoing series Ritual and Change. Zeigler has been carefully washing and collecting the shells of eggs that her family has consumed for over thirty years. These works explore the small daily gestures that give rise to rituals, their formation, and evolution over time. In a period of accelerated change coupled with an increasingly precarious environment, this body of work serves as a reflection on time, transformation, the role of ritual in our lives, and links aspects of daily ritual to personal and societal change.

Farheen HaQ’s multidisciplinary practice employs video, installation and performance.  As a South Asian Muslim Canadian artist living in Victoria, BC her current work focuses on understanding her family history on Canadian territories, caregiving and the body as a continuum of culture and time. She has exhibited her work in galleries and festivals throughout Canada and internationally. Farheen received a BA in International Development (1998) from the University of Toronto, a BEd (2000) from the University of Ottawa and an MFA in Visual Arts (2005) from York University. In 2014 Farheen was nominated for Canada’s Sobey Art Award.

Deborah Koenker is a Vancouver-based interdisciplinary artist whose practice explores narratives, borders and transformative justice.  Professor Emeritus, Emily Carr University of Art and Design, she was instrumental in establishing Malaspina Printmakers Workshop, Vancouver, serving as inaugural Director. Active in curatorial projects, writing, panels, lectures, and artist residency programs internationally, Koenker was selected for an invitational residency on Equal Justice at the Santa Fe Art Institute, New Mexico (2018) and the Canada Council International Paris Studio (2011).  Her work, exhibited in Canada, the US, Mexico and Spain, is represented in more than 30 public collections in Canada and the United States.

Bev Koski is a graduate of the Ontario College of Art and has a BFA from York University. For many years Koski worked with 7th Generation Image Makers, an art and mural programme for Indigenous youth run by Native Child and Family Services of Toronto. Her work has been exhibited at the Harbourfront Centre, Toronto, Kamloops Art Gallery, Carleton University Art Gallery, Thunder Bay Art Gallery, Gallery 44, Oakville Galleries and the Textile Museum of Toronto. Her work is in private collections, as well as Carleton University Art Gallery, the Canadian Museum of History and the Indigenous Art Centre of Canada. Bev Koski is an Anishinaabe artist living in Vancouver, BC.

Mitra Mahmoodi is an emerging artist based in Vancouver, Canada. She graduated in 2009 with a degree in Economics from her home country of Iran. Soon after immigrating to Canada, she commenced a career as an artist working in ceramics. Mahmoodi studied Ceramic Design at University of Arts London, UK before returning to Vancouver and transferring her education to Emily Carr University of Art and Design.  Her work has been exhibited at group shows at Medalta, the historic clay district in Medicine Hat, Alberta; the Pangolin London; Ceramic Art London; Central Saint Martins and The Wedgwood Museum in the UK.

Bettina Matzkuhn works primarily in hand embroidery, valuing its versatility as a visual language. Her narratives predominantly focus on ecology, weather, and geography. Matzkuhn holds a BFA and an MA from Simon Fraser University, and is the recipient of Canada Council and British Columbia Arts Council Grants. She has exhibited in solo and group exhibitions across Canada, as well as in Korea and the United States. Her work is found in national public collections such as the Surrey Art Gallery, Cambridge Art Galleries and the Weldon Map Library at Western University. She lives and works in Vancouver, British Columbia.

Barbara Zeigler is an artist and Professor Emerita of the Department of Art History, Visual Art and Theory, University of British Columbia (Vancouver). Her artworks have been widely exhibited nationally and internationally and are in numerous national and international public collections.  In addition to print media as a sustained focus, Zeigler works in video, installation, drawing and public art. Her work investigates social and political issues related to human and non-human life and the overlap of image and ideology in divergent forms of representation. Continuing concerns since the late sixties have been ecological degradation, and the need for a paradigm shift regarding the human interaction with the land and other life forms.

Above: Farheen HaQ, "Drinking from my mother's saucer", 2015, video still. Courtesy of the artist. 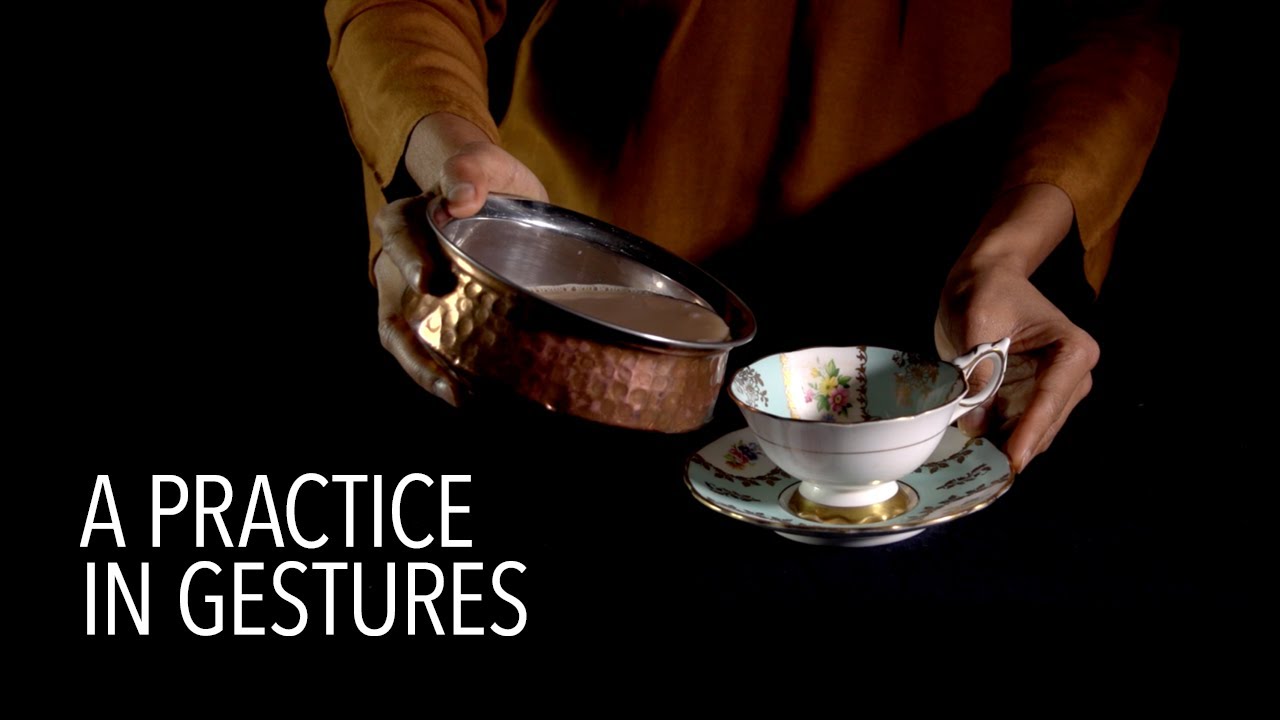 WATCH: Video exhibition tour led by curator Nan Capogna highlights the works in A Practice in Gestures, on view from September 10 - November 14, 2021.