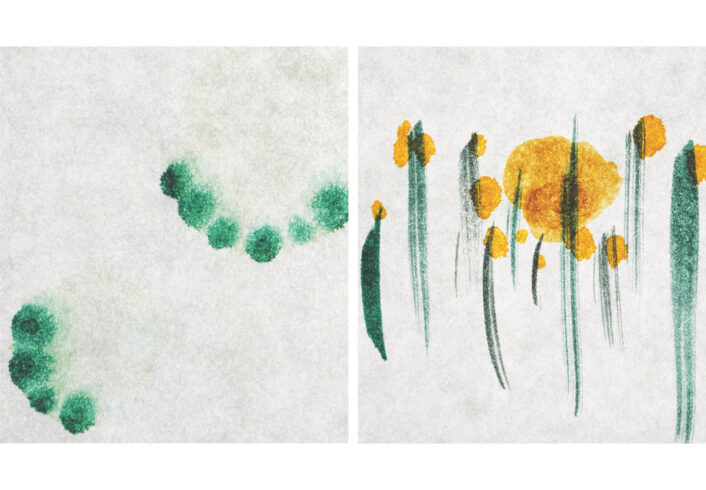 Jane Wong: After Preparing the Altar, The Ghosts Feast Feverishly

Nourishment – its scope and significance ­– lies at the heart of the works of Jane Wong, and artist duo, Mizzonk, Wan-Yi Lin and Roger Chen. How we are nourished, often characterized in terms of deprivation or abundance, can rouse memories of deep emotional intensity. Wong, a Seattle-based poet and artist, draws upon her experience of growing up in a Chinese American restaurant in New Jersey, and her family’s history of hunger and poverty in China. Taiwanese born artists, Lin and Chen, live and work on six secluded acres in Greater Vancouver, a practice in living that has provided sustenance and inspiration for the past twenty years. Wong and Mizzonk present two installations respectively: After Preparing the Altar, The Ghosts Feast Feverishly* and Six Acres.

Central to Wong’s installation is the table poem, After Preparing the Altar, The Ghosts Feast Feverishly. Constructed as an oversized, round dining table – typical for Chinese restaurants – it holds numerous food bowls containing fragments of the poem written on their interiors. Viewers are obliged to walk around the table in order to read the black text. Food imagery – tender and visceral – features in many of Wong’s poems.  Fond childhood memories of food and sharing food are in stark contrast to her familial history. Wong’s mother was born in China at the end of the Great Leap Forward (1958 -1962), the campaign to reshape farming and industrialisation policies. Also known as the Great Famine, it resulted in an estimated 36 million deaths due to starvation.

Mizzonk’s Six Acres is a projected animation produced from numerous watercolour drawings on paper. The slowly shifting compositions – pictorial recordings – developed from Lin and Chen’s observations of living and absorbed within their rural environment. In 2001 the artists experienced the September 11 attacks on the World Trade Centre from the rooftop of their Brooklyn studio. The magnitude of the event propelled them to follow their intuitive impulse “to be with nature” and they moved outside the urban mainstream. Six Acres – with its creek, forest, grassland, and gardens – provided the nourishing and restorative environment to practice self-reflection and mindfulness, and to confront unresolved childhood memories. The artists daily living revolves around the rhythms of nature, and they have adapted and prioritized their activities accordingly within the serenity of six acres.

Through their works and personal histories, the artists present a gamut of realities: Wong highlights the impact of intergenerational trauma, food deprivation and waste, and the challenges faced by low-income immigrant families; Lin and Chen foreground the value of intuition and the beneficial influence of the natural world on mental health. Particularly within the context of a global pandemic, their works are reminders of our capacity to nourish ourselves and others.

*Jane Wong’s table poem, After Preparing the Altar, The Ghosts Feast Feverishly was first exhibited at the Frye Museum in 2019.

A Kundiman fellow, she is the recipient of a Pushcart Prize and fellowships and residencies from the U.S. Fulbright Program, Artist Trust, Harvard’s Woodberry Poetry Room, 4Culture, the Fine Arts Work Center, Bread Loaf, Hedgebrook, Willapa Bay, the Jentel Foundation, SAFTA, Mineral School, the Barbara Deming Memorial Fund, and others.

The recipient of the James W. Ray Distinguished Artist award for Washington artists, her first solo art show “After Preparing the Altar, the Ghosts Feast Feverishly” was exhibited at the Frye Art Museum in 2019.

Mizzonk is the collective name of the artist duo Wan-Yi Lin and Roger Chen, Taiwanese Canadians.  Mizzonk studio has received several awards including the Accent on Design Award, a design industry award held in New York City, and the TID Award of Space Installation Art held in Taipei, Taiwan. Mizzonk’s desktop works were carried by museum stores including the Winnipeg Art Gallery and the Museum of Arts and Design in NYC. Recent projects by Mizzonk include a one-year-long participatory art project in Maple Ridge, BC; the Outdoor Sculpture Exhibition in La Conner, WA; the TID Award Exhibition in Taipei, Taiwan; a solo installation at the Center on Contemporary Art in Seattle, WA; an ongoing billboard art project and a participatory public art project in Pingtung, Taiwan.

They are graduates of the Pratt Institute in Brooklyn, New York. Lin holds a MFA in visual arts and Chen received a Bachelor of Architecture. They live and work in Greater Vancouver in British Columbia.