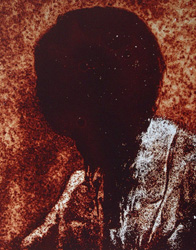 The term doppelganger refers to an apparition or double of a living person; Oxford English Dictionary.

This exhibition consists of several series of portraits. Portraits, that is, in the sense that the images are ‘likenesses’ and in that they are asking questions about representation; questions about who we are as we know it through how and what we represent. Some of Sean Alward’s portraits are ‘imitation’ photographs (photograms) created by arranging thousands of poppy seeds on photographic paper in the shape of a picture, exposing them to light and printing the resulting image. Each seed leaves a white dot where the light was unable to touch the paper, so a negative drawing is produced. This process allows the introduction of the hand into a normally mechanically mediated process. These photograms picture the grotesque, such as images of Egyptian mummified heads or censored pictures of ‘purged’ political officials whose faces were inked over during Stalin’s reign of terror.

Other images in the exhibition are portrait paintings from live models juxtaposed with labels describing a social category or typology they belong to. These pictures explore the formation of identity through the process of naming. They refer to August Sanders’ Citizens of the 20th Century in which he attempted to describe society through a system of types based on status, vocation, and gender.