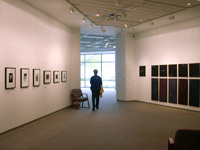 Shirley Inouye – Changes/New Beginnings
In the spring of 1996 my sister and I, with my mother as a perfect guide, visited our parents’ homeland, Mio Village, Wakayama Ken, Japan, sister city of Richmond. Staying in the ancient home where my deceased father was born and raised was a wonderful experience and gave us a better understanding of our parents lives. The village, much like a scene from a samurai movie, has seen very little change since the late 1800’s. Many homes were boarded up and abandoned as the villagers sought a better future.

Change is very, very slowly happening with the influx of retirees, and a new generation heading back to their homeland. Likewise, changes are happening in my home of Richmond with the decline of the fishing industry.

Discovering the joys of working with clay in the late 1970’s has opened a world of never ending learning for me. The representation of work in clay and an exploration of lanterns expresses changes and new beginnings in my life and the world around me in Richmond.

I would like to dedicate this exhibition to my colleagues and friends at the Cultural Centre, who are now retired; adapting to “Changes and New Beginnings”.

Rozita Moini Shirazi – Windows
Until the age of 21 I lived in Iran, a world of violence, censorship and silence. Art became a way to hammer at the unsaid and the unseen; it became my voice. Although some of my current work uses the image of the eye behind the veil, my concerns are not just with the repression women face in revolutionary Iran but with the dynamics between women and culture in general. Even in works that represent my personal experiences in adolescence, war, exile, love and motherhood, I try to show a process of growth that is common to the female psyche.

I have used cloth as a metaphor for layered experience and to show how my own thoughts had to be hidden. The use of cloth is also a reference to the chador, a garment that allows the wearer to see by remain unseen. The chador, however, does not give privacy or protection as much as it cripples the wearer’s relationship with society by denying an equal exchange of vision. In Looking Inside, for example, the cheesecloth dulls the vibrant colours of the forms beneath. As for colour, for me it has always been an expression of experience and emotion. The world cannot exist without it.

Culture and all its rituals and traditions has not defined me, but it has shaped me and thus my art.

Shelly Bahl – New Works on Paper
Within Shelly Bahl’s art practice she has been exploring the history and exotification of Indian art and culture, and much of her work plays with and questions the practices of Orientalism, kitsch appropriation and the mass-production of culturally-specific iconography.

For the past few years she has been making neo-Pop Art vignettes inspired by Mughul miniature paintings. She appropriates images of royal women pursuing leisure activities in the Islamic Mughul courts, and juxtaposes and intertwines them with images of dancers from Medieval Hindu temple sculptures, and depictions of contemporary women and popular culture. At first glance, the images resemble traditional Indian miniatures, but close observation reveals surreal worlds where things are not so easily defined.

Currently, she is also developing new site-specific installations that create environments of decorative patterning and which become stages for interactive acts of consumption and storytelling. These installations, and a related series of drawings, explore the global public fascination with ‘Indian Chic’ in fashion and popular culture, as well as the glorification of ethnic consumerism/consumption. The wallpapers in these works are over-laid with drawings and prints of cliché South Asian motifs and contemporary images of women appropriated from popular international magazines.

For this exhibition, Shelly Bahl will be exhibiting a new group of mixed-media works on paper that have developed out of these current projects.